The greatest singles band of all-time? 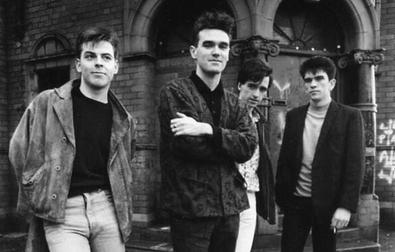 The Smiths made some truly great rock and roll music. That being said, their discography is confusing, and their 4 albums are chock full of filler.

Furthermore, their LPs are already too familiar when you listen to them, and the tracks that aren’t familiar often feel overly mechanical. It kinda feels like Marr and Morrissey were never really as deeply connected on a musical level as you might think.

So I guess I am saying that The Smiths were not a good ALBUM band. Great SINGLES band, one of the best of the 80’s! So, if you have Hatful of Hollow and The World Won’t Listen, you’ve got most of The Smiths that you really need…

It has some great tracks, but the 3 best existed in other contexts, so it's hard to feel like they are truly unique to this record. I do love "Reel Around the Fountain" as a slow opener after the manic pace of their first 3 singles (which are all included here), and "Still Ill" is great. But all in all, their debut feels pretty uninspired.

On the verge of being a great album, but just doesn't get there. For as great as The Smiths were on the singles front, so many of their album-only tracks just felt like they were mailing in, as if Morrissey and Marr were disconnected when writing those tracks. So the playing is great for the most part, and Morrissey SOUNDS great of course, but it just doesn't always jive. Also, way to screw up your own record with that closer...

The Queen Is Dead

Three albums in, and I'm realizing that The Smiths struggled with this album thing. LP3 is generally the one most praised, but even here, it never really reaches pace until track 5. Very uneven.

HIGHLIGHTS: "There Is a Light That Never Goes Out", "Cemetry Gates"

Their last LP is probably their best. But seriously, why would you not start this album with "Stop Me..."? That song is the perfect opener. The Smiths are so confusing...

HIGHLIGHTS: "Stop Me If You Think You've Heard This One Before", "Last Night I Dreamt That Somebody Loved Me"

Other than The Smiths, I can’t think of any band since the 60’s (think Beatles and Stones) that released so much of their best material as non-album singles. Consequently, that makes this section of my Smiths retrospective more challenging than normal. The two main compilations were Hatful of Hollow and The World Won’t Listen. Beyond that, there have been several compilations, but there’s a lot of overlap with those.

Whatever it is, it's their best collection of songs.

Between this and Hatful, you've got so many of The Smiths' best tracks collected together. Of course, there are many other highlights, but most of them are found on their albums, or even other compilations.

HIGHLIGHTS: "Panic", "Unloveable", "Half a Person", "Oscillate Wildly", "You Just Haven't Earned It Yet, Baby"