June of 44 were an indie rock band that existed from 1994 – 1999. This is an overview of and personal reflection on their recording history. 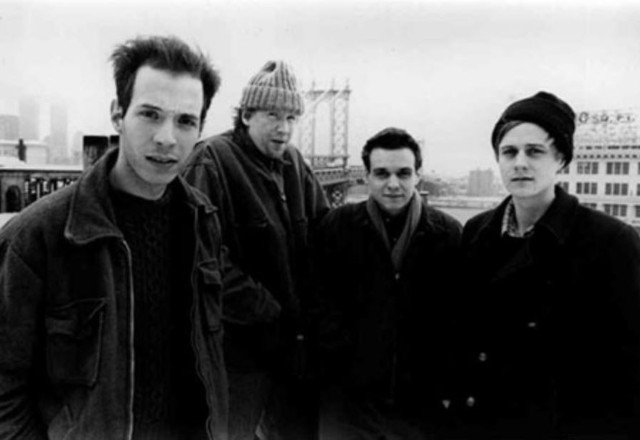 When they broke up in 1994, Louisville indie rockers Rodan fissioned into a host of creative sub-particles. Most notably, Rachel’s further explored the latent neo-classical sensibilities exhibited in “Bible Silver Corner”, Sonora Pine dwelled in the dreamy darkness of Tara O’Neil’s aesthetic vision, and, eventually, Shipping News reunited Jeff Mueller and Jason Noble in 1997. However, the heir apparent to Rodan’s loud / quiet / loud post-hardcore was, at least at first, Mueller’s June of 44.

For that reason, June of 44 were quickly heroes of mine. While nothing can quite make up for never getting the chance to see Rodan live, I did get to see June of 44 a few times, and the first time was so glorious that I wrote a fawning essay about it for my high school English teacher. I’m sure it became just as pivotal for her as it was for me.

June of 44 built something utterly unique in the short time they existed. Mueller was joined by guitarist Sean Meadows (of Lungfish), bassist Fred Erskine (of Hoover), and drummer Doug Scharin (of Rex). All 3 of those fellas had their own truly unique styles, and the mix was simultaneously monstrous and delicate, quite worthy of the Slint-ish modifiers that frequently adorned the descriptions of the band. Scharin, in particular, had a totally singular rhythmic style that ended up being a component of the band’s sound. And Erskine played the trumpet on some tracks, which added a fantastic, atmospheric touch and worked oddly well. Plus, they sang about ships and the seas and nautical stuff like that! There was something quite literate about all of it, even though you couldn’t possibly understand exactly what they were getting at.

The band enjoyed a really strong run. In the space of about 5 years, they released 4 full-lengths, 2 extended players, and a few non-album cuts. In the process of drafting this article in the summer of 2018, I discovered that they had reunited for a few festival dates in Europe. I hope they can find the time to reunite for a few dates stateside in the near future. It would be cool to see them live again!

UPDATE 9/21/2021: Well, I did get a chance to see the re-united June of 44 in Louisville back in January of 2020. They were great! And since then, they have released a new record, Revisionist. You can see my assessment below.

Engine Takes To The Water 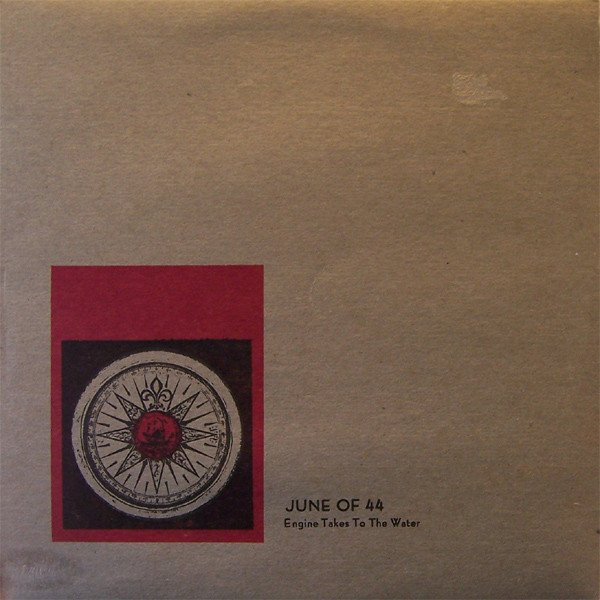 It wasn’t quite the sequel to Rusty, but Engine Takes to the Water was the closest thing we ever got. Though it’s missing Noble’s aesthetic of strange beauty and O’Neil’s quasi-gothic melancholy, Engine is built on the foundation of the same delicate hardcore as Rodan. And I think this may well have been the inaugural “boat rock” record: it’s so full of nautical references that you kind of wonder if that whole sub-sub-genre is just one long rabbit trail off of “Good Morning, Captain”. I love this record. There’s so much going on musically, and it just never seems to exhaust itself. Definitely the place I’d recommend you start if you are new to June of 44, as it might just be their best LP. 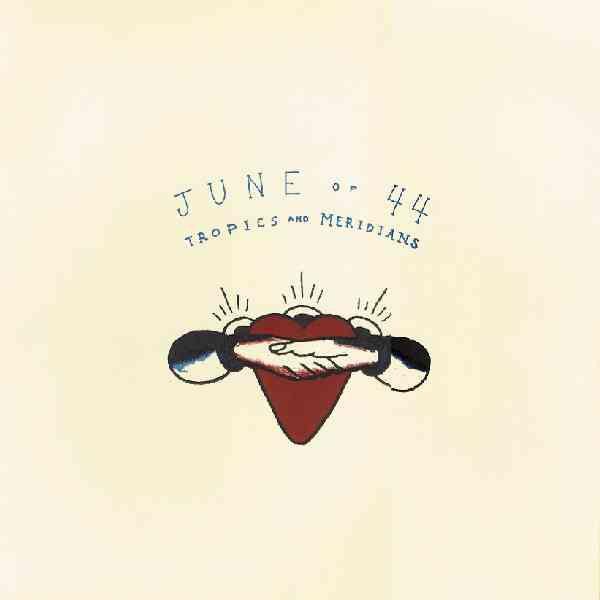 YAR! The slacker-pirate wanderlust continues! Somehow June of 44 managed to compose post-rock sea-shanties without it coming off cheesy at all. I gotta be honest – I love the tracks here, but the recording is a bit grainy, even lo-fi, at least as I hear it. Still, the songs themselves are top-notch, and it’s a very worthy sophomore release. “Anisette” is a math rock benchmark, and “Lusitania” and “Arms Over Arteries” also rank among their best work.

Four Great Points rivals Engine Takes to the Water as their best LP. It was a big creative leap forward for their band. One half of the four tracks here are a natural continuation of what they’d been doing before; the other half embark upon diverse and very strange new soundscapes. “Lifted Bells” and “Doomsday” seem to take their cue from Tortoise’s bass-heavy instrumental tradition (which all the rage in indie circles in the late 90’s), while “Shadow Pugilist” and “Air #17” end the record in sleepy, poetic reverie. Four Great Points makes me wish June of 44 had soldiered on into the next millennium. It makes it clear this was a band that didn’t have trouble finding new creative avenues.

HIGHLIGHTS “Of Information and Belief”, “Doomsday”, “Does Your Heart Beat Slower?”, “Lifted Bells” 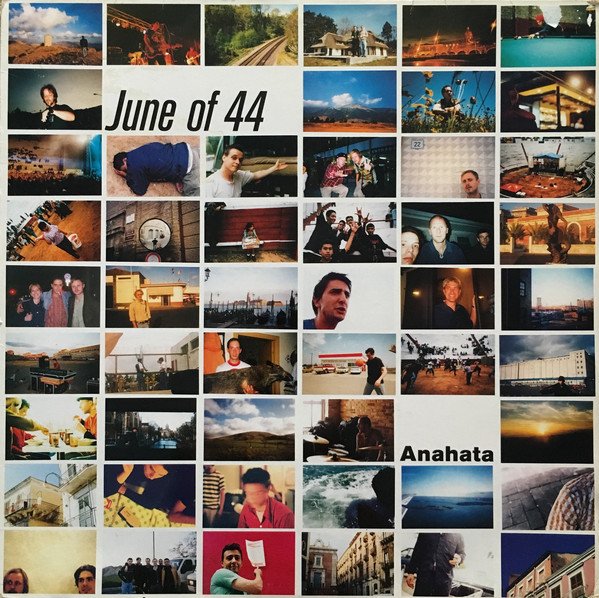 I wasn’t particularly fond of Anahata when it came out. To me, it felt like the band was starting to lose the plot or repeating themselves or both. However, due to the dearth of further output beyond this, I’ve grown to greatly appreciate the band’s last full-length over the years. And I really do think that it stands on its own.  On Anahata, June of 44 channel the fusion sound they had begun to explore on “Boom” and “Lifted Bells”, and though I don’t think I’d ever heard Bitches Brew at the time, now I dig all that stuff. Four long players plus desserts in five years is a lot for guys who aren’t getting VMA nominations, so I guess I can understand why this had to be the end. Not a bad way to go out!

The Anatomy Of Sharks EP 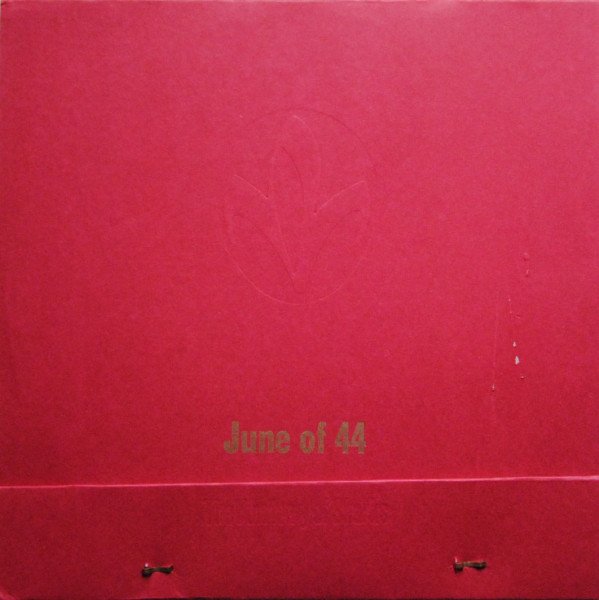 Worth the price of admission for “Sharks and Sailors” alone. It seemed they had reached peak epic indie rock on “Anisette”, but “Sharks and Sailors” exists on a level of being all its own. Sharks also features their first fusion work in “Boom”. It’s not one of their best cuts, but it marks a point where they began to open up their sound to other types of instrumentation and styles and began to experiment with other textures and song structures. And don’t forget “Seemingly Endless Steamer”, which is a cool track itself, even though it pales in comparison to something as great as “Sharks and Sailors”.

In The Fishtank EP 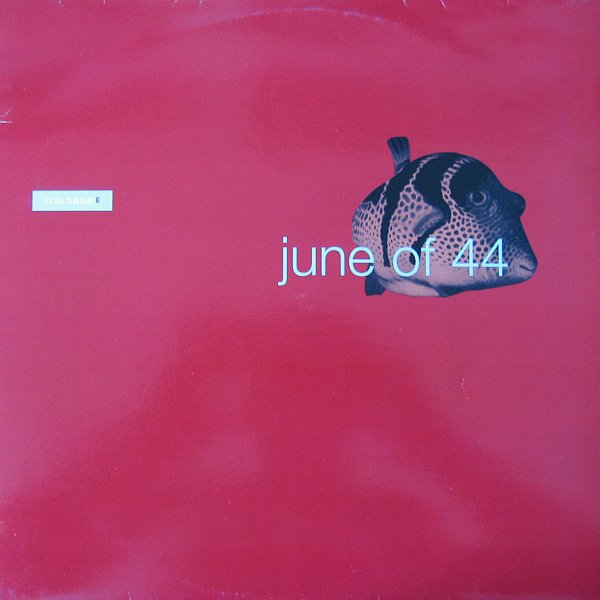 Not sure if this is an LP or an EP. Anyway…after recording Anahata, June of 44 was invited to record for 2 days in a Holland studio for the Konkurrent record label’s In the Fishtank series. And it’s actually pretty great! The tracks here range from luscious, lazy instrumentals (“Henry’s Revenge”) to explorations in kraut-rock (“Modern Hereditary Dance Steps”) to funky vamps (“Pregenerate”). The wall of feedback that opens “Every Free Day a Good Day” is a truly wondrous thing. Kinda hard to believe they put this together in 48 hours. That’s a solid argument for restrictive creative constraints. Come to think of it, given that the band recently reunited, they oughta try this again! I’d like to hear what they could come up with now after 2 days in the studio.

Revisionist: Adaptations & Future Histories In The Time Of Love And Survival 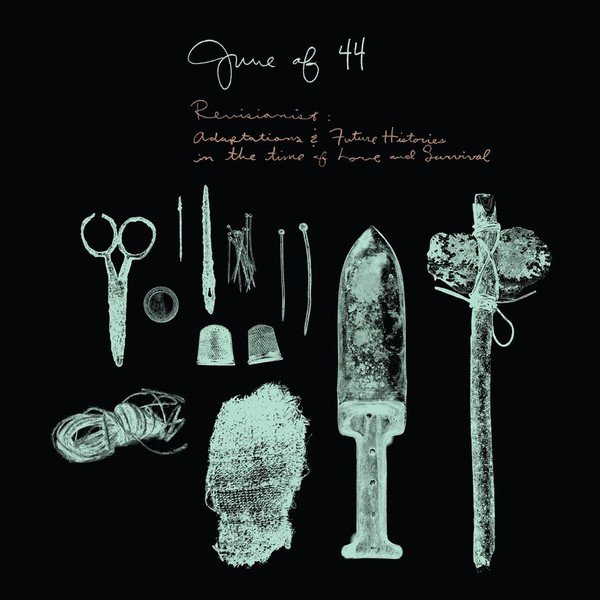 Though dubbed a new LP, Revisionist doesn’t consist of a set of new songs. Rather, it’s a collection of re-records (“ReRecorded Syntax”, “Cardiac Atlas”, “Generate”, “No Escape, Levitate”), re-mixes (“A Chance To Cure Is a Chance to Cut Your Face”, “A Past to Face”), one new song (“Post-Modern Hereditary Dance Steps”), and one outtake from their original run (“Paint Your Face”). As such, it feels like something of a scrapbook, though a highly enjoyable one that will appeal to fans (including this one).

There’s not a whole lot of extra tracks and rarities for June of 44. Aside from some live cuts of album tracks appearing on various indie compilations, the band produced 2 non-album tracks, only one of which, “Rivers and Plains” (from the legendary Lounge Axe Defense & Relocation compilation CD), could be considered a studio track. But it’s an outstanding track, one of their absolute best, and a must-hear for any fan of this type of music. One of these days I’ll give it its own write-up. The other non-album track is “1000 Paper Cranes”, released on a split 7″ for the Magic Eye singles series. It’s a pretty little nothing, but sounds like it was recorded on an answering machine. Listen to it here.

Though pretty short-lived, June of 44 delivered some of the most original hard rock of the late 90’s. And I would be remiss if I didn’t mention one of the greatest things about the band: the artwork! Seriously, June of 44 had some of the best album artwork of the 90’s, creative, textured, artistic stuff. I wouldn’t describe it well, but it’s worth checking out the examples over at Discogs. For example, the stamps that came with Tropics and Meridians.

Rodan, and the bands that emerged from it, played an incredibly important role in my high school years, and influenced my musical tastes for the rest of my life. Going back and listening to June of 44 for the first time in years recently, I was surprised by just how fresh and vibrant their records still sound. Looking back, it was probably best that they ended things when they did. After all, it’s hard to keep such a strong creative pace for 5+ years. Still, I have a hard time thinking I wouldn’t enjoy any of the records they would have made beyond. June of 44 was one of the truly great and memorable indie rock bands of the 90’s, and I’m thankful for what they gave to the world.

Have your own thoughts on June of 44? Got thoughts on my thoughts above? Feel free to share them in the comments below!