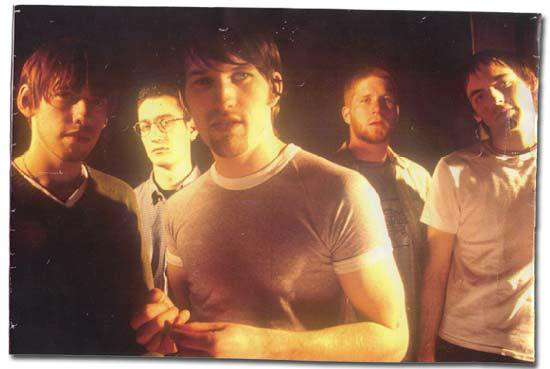 I like to think that, in a better alternate universe, Chamberlain enjoy the same success as The Killers.

The story goes like this: some Indiana boys started a hardcore band in the early 90’s called Split Lip. Split Lip were better than most hardcore bands, and featured a very talented lead guitarist (Adam Rubenstein) and a very talented vocalist (David Moore). Split Lip gained a bit of a following, and released a very strong debut LP in 1993. After that, they released a very strong followup, but…the boys were growing up…

So in 1995, they changed their name to Chamberlain, embraced their inner Mellencamp, and started making heartland hard rock. They re-recorded and re-produced their second LP, and confused a lot of their existing fans.

Now why did they do that? Who knows…I look back on it and see it as a genuine thing, but in the mid-90’s hardcore scene, it sure did look like “selling out”.

Regardless, their songs just got better and better. In particular, David Moore proved himself to be an amazing lyricist – maybe TOO AMAZING. You can just see the suits complaining that his lyrics make you think TOO MUCH. “Can’t you guys just do what Matchbox 20 does???”

I listen to them now, and I realize that they were channeling then what The Killers are now to packed arenas. I think Chamberlain were just too early to the party.

Seriously, I LOVE THIS BAND. They have made a whole lotta great music, and David Moore may be the best lyricist you’ve never heard of. Actually, you’ve probably heard of him if you’re reading this, but if you’re just discovering Chamberlain as of late, I hope this retrospective helps you understand their story a little bit.

And, to the guys in Chamberlain: THANK YOU. Your music has meant a whole lot to this Kentucky kid…

For The Love Of The Wounded

This is a great hardcore record - dynamic, layered, melodic, even atmospheric. A couple of the tracks are STONE COLD CLASSICS - especially "Anthem Boy" and "Division Street". I can see WHY they abandoned this path, because this level of angst doesn't last forever, but as a document of them teenage emotions, this is a classic as far as I'm concerned.

Fate's Got A Driver (Chamberlain version)

I adore this record. It may be a bit dated to the era of heavy feelings, but it's like the best of Mellencamp met the best of Fugazi. Just has a great, poetic feel. Perfect IMO.

HIGHLIGHTS: "Her Side of Sundown", "Street Singer", "Yellow Like Gold", "Drums and Shotguns", "The Simple Life"

The Moon My Saddle

This is a great record, but to this day I still feel like they abandoned their post-punk roots a bit too quickly. The Fate's sound had it going on, and everything here is just a bit too mid-tempo. Still, it stands as a pretty strong album, and one I highly enjoy.

HIGHLIGHTS: "Stars in the Streetlight", "Good Enough", "Last to Know"

On Exit 263, only David Moore and Adam Rubenstein remained from the band's 90's heyday. It has a bit more of a stripped back sound - the "DC-edge" of FGAD is all but gone - but the songs are dynamite. Basically, it's a great road record, with more focus on craft than dazzle. This was the end of Chamberlain until the original lineup reunited several years later.

Solid reunion LP! It may be officially dad-rock at this point, but of course that's perfect for Chamberlain 25 years after Fate's Got A Driver. Hope this isn't the last we hear from Chamberlain!

HIGHLIGHTS: "Not Your War", "Red Weather"